I just had a mind-blown moment about the new macro skill that people need to learn in order to thrive in the future. I believe this one skill will put people in a position to overcome numerous trends that threaten to reduce jobs in the future from automation to the end of ownership.

That skill is entrepreneurship. 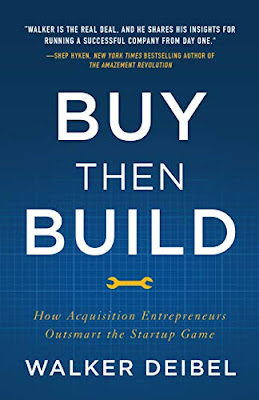 I don’t mean that in the silicon valley, startups are the future kind of way. I mean that in the entrepreneurs are creative people who figure things out, create something people want to buy, and then build it.
I am not really an entrepreneur. I’m more of an intrapreneur. I say that because I have a day job. Though I do have two side businesses that I spend time on and that earn each a little income. I have, from time to time, planned businesses I might start. And in a few occasions considered buying a business.
I just finished reading the the very good book, Buy Then Build: How Acquisition Entrepreneurs Outsmart the Startup Game, by Walker Deibel. I read this book to further learn some ideas for how I might buy a business, then build it. I’m not sure I have the energy to start something from scratch. My plate is full. But buy something that’s already up and running? That has potential.
Aside from learning in this book why buying a business reduces the risk building a successful business, there was another lesson in this book that made me believe entrepreneurship is the most important skill to learn now.
Here’s how it’s described in the book.
In the agricultural economy, land had to be over come. Buy land, cultivate land. build in land. grow on land. Produce something on the land.
In the industrial economy, money and capital had to be over come. You had to build factories and railways and automobiles and organize people to produce large amounts of goods, deploying money and capital to produce things people wanted to buy.
In the knowledge economy, education had to be over come. You had to learn marketing, selling, information systems, computer science, project management, human resources.
Today, it seems all of these things are abundant. Land, capital, education. You might argue land is still finite, but with things getting smaller and smaller, land is less important. Money is everywhere. Inflation took care of that. And education? Anyone can get an education. Maybe not everyone can afford to get a degree, with the skyrocketing cost of higher education, but learning skills of the knowledge economy are easier than ever.
Entrepreneurship might be accessible to anyone, but it is still hard enough that not many can do it. It is therefore not abundance. The next macro economic trend, whatever it is, will be defined by people who observe opportunities, make connections between seemingly unconnected ideas, put them together, take a risk, and build something from nothing.
Automation cannot eliminate that.
I don’t want to be eliminated.
Not yet.
Labels: entrepreneurship intrapreneur