I ran Way Too Cool 2018 this past weekend. I had a great race. I was not my fastest race. But it might have been my best race. I learned a lot. There are three things I learned.

#1 Things Are Rarely As Bad As They Seem

It rained a lot in the 3 days before the race. The Auburn area received several inches of rain. And the forecast was for it to rain all day during the race. It was even pouring down rain in Folsom when I went to pick up my bib at Fleet Feet. All signs pointed to it being a tough, cold, wet, muddy day.

As is turns out. it hardly rained at all during the race. The sun even came out a few times. It was cold, but not really after I started running. Yes, my feet were cold most of the day from the mud and puddles, and creek crossings, but not numbing cold. Not really.

In other words, the race conditions were way better than expected. On Friday afternoon, the apparent conditions were screaming, "Don't run. Stay in bed. Try again next year."

Thank goodness I did not listen to my demons. I told them, the night before the race, "Back off. I'm running."

Lesson: Go anyway. Even when you don't want to.

I am no gear geek. I don't get caught up in getting all the cool gear. I have a simple Timex watch. Champion running shirts from Target. Last year, I ran Way Too Cool holding a Crystal Geyser Half Liter Water bottle. That's it.

The right equipment does matter.

My shoes. I ran this year's race in the Altra King MTs. Despite me switching almost entirely away from Altras because the shoes seem to be getting narrower and narrower, to the point now where trying on a pair of Altra's makes me feel like I am wear a pair of Ferragamos (Read: narrow, Italian leather shoes), I kept my King MTs.

While other runners were tentative with their footing, slipping in the mud, especially on the downhills, I flew past people with my grippy Kings. These shoes gripped the deep, sloppy, slipperly mud like Bridgestone Blizzak snow tires on the Mount Rose Highway in a January snow storm.

I passed people on muddy down hills like they were standing still, and I was Max King. 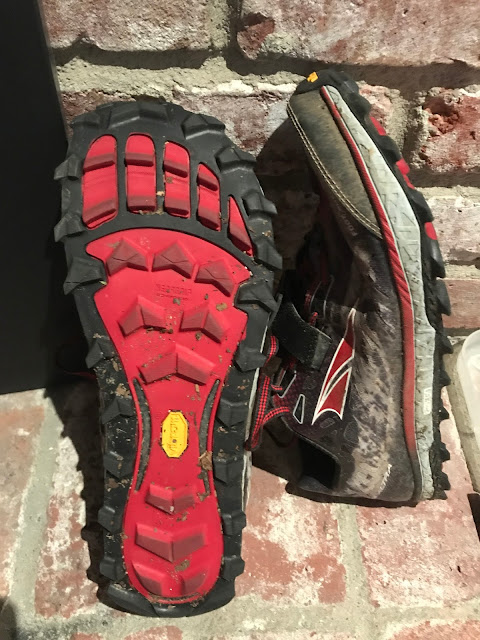 I have been training at the Maffetone Heart Rate since 2015, but only recently altered my diet to be more high fat. I felt strong throughout this race. In fact, according to Athlinks, I moved my 118 spots in the race after mile 8.

I argue, I started out just right, and just didn't slow down as much as others. Either way, I was able to run well at the end on the flats and downhills. I even hiked up Goat Hill without feeling like my lungs would explode. I did not stop and rest. I just hiked up (slowly, of course) steadily. Evenly. And when I got to the top, I kept walking to the aid station, grabbed two quarter PBJs, refilled one bottle, and started running.

I'm now more hooked than ever on that heart rate training thing. Who needs speed work? I am getting faster naturally.