Getting Sick and Coming Back

Right in the middle of training for the Colfax Half Marathon, I got sick. My training had been going very well, and I could feel myself getting stronger. Then...wham! I get the flu. And if that wasn't bad enough...I had a relapse and was bed ridden for two days. All in all, I was sick for two weeks.

If you look at the graph below of my training log, you can see fairly consistent mileage until that gap right in the middle. That's when I got sick. 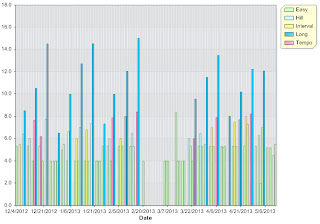 I did not run for two weeks. And then I took two more weeks of gradually easing back into my regular mileage. Essentially, I lost four weeks of training.

Some good did come out of this black hole.  I learned that:
Looking back on that four weeks, it does not even seem like a blink. But during that period it seemed like an eternity. However, looking at the big picture, these downtimes can be over come to the benefit of the longer term goal which is simply to be a consistent runner.

Next time I get sick or injured, I will better understand what to do to come out of it stronger than ever.